49 Years Since Jimi Hendrix Moved Into the Next World. 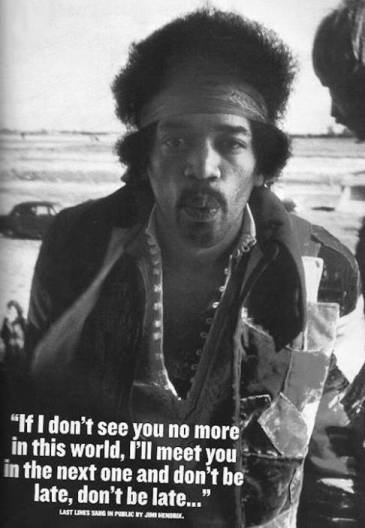 It always amazes me how quickly time moves on.  It seems like only yesterday that I heard that Jimi Hendrix that died.  I was still a teenager, but I had seen this remarkable man so many times live and wasn’t even 20 years old.

On Friday September 18, 1970 Jimi Hendrix died. I had seen him perform live ten times and no one ever blew me away like he did. I was a straight kid and did not use drugs, yet I understood completely what his music was about. People often associate those who like Jimi Hendrix with drugs; you don’t need drugs to appreciate his art. I wish I could help you feel the experience of him live because literally I could feel my body vibrate and move in whatever direction he wanted it to when he played his guitar. Jimi is often considered the greatest guitarist in rock and roll. He is known for playing guitar left-handed and behind his back and with his teeth without missing a single note. It was an amazing experience and no one else ever was able to do that for me.

No matter what videos you see of Jimi performing it never will capture what it was like to see him live.

I lived in Los Angeles and I saw most of the major groups in the 1960’s and 1970’s. I am so grateful I lived through that amazing time. People have tried to capture that time period today, but unless you were there you will never really understand or experience it. I had just seen Jimi Hendrix about two months prior to his death. He came on stage much different than before. He did not have a smile as he usually did and just played his songs without much emotion. I felt that something was wrong in this man’s life, but had no idea what it was. Turns out the man was overworked and burnt out, but the promoters kept booking more and more performances for him.

The news of Jimi’s death came on a Friday and I spent the weekend feeling the loss of such a beautiful person and the greatest guitar player ever. It was hard to believe because he was so young, only 27 years old, and to be gone and to lose what could have been. He died from suffocation (in his own vomit) after taking too many sleeping pills. He was not a heavy drug user, of course he used drugs it was common for the time, but he was not a drug addict. I believe the man was just looking for some peace and quiet having been touring and traveling nonstop for the past three years.

I had my own private goodbye to Jimi that weekend alone.

For those of us who lived during this wonderful creative time we can never forget this gifted artist that changed the world then quickly left. His influence is felt even to this day and will continue to be felt for centuries to come. What if he never would have truly lived and expressed what he felt? The world would have missed out on so much. Jimi Hendrix could not read or write music, but did that stop him from playing the guitar? No. Jimi Hendrix is listed as the number one guitar player in the world by the Rock And Roll Hall Of Fame.

My wonderful cat Isis absolutely loved Jimi Hendrix. Whenever I would play his music she would sit in front of the big speakers in the living room and listen intently.  It reached the point all I had to say was, “Isis, Hendrix’s on.” She would come running into the living room from wherever she had been and sit down by the speaker.

“It’s funny the way most people love the dead. Once you are dead, you are made for life.” Jimi Hendrix

Thank you Jimi for all you gave us, and I hope to see you on the other side and here you play once more.

With love and gratitude,
Cherokee Billie

Want to know what it was like to see Jimi Hendrix live? I have a two part of video about the first time I saw Jimi Hendrix in 1968.

Honoring Those Who Gave Their All on September 11, 2001

Comments on: "49 Years Since Jimi Hendrix Moved Into the Next World." (2)